A library-sponsored group open to everyone ages 18 or older! Take part when and where you want. Our goal is to read a wide variety of books and meet new people! We request that everyone be respectful of other's opinions.

Join us on the 2nd Monday of every month at 6:30 pm for our Open Book Club meetings. If you can’t commit to every month that’s not a problem—just come when you can!

Take part in the online component of our book club. People who are not able to join in face-to-face meeting times or who just want some more discussion can do so here! 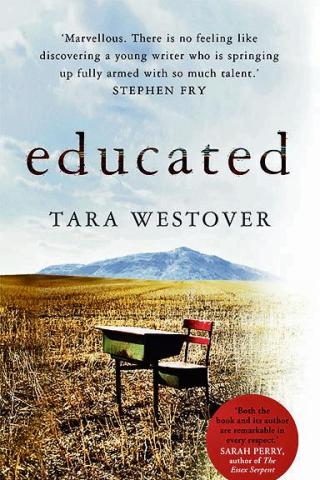 Tara Westover was 17 the first time she set foot in a classroom. Born to survivalists in the mountains of Idaho, she prepared for the end of the world by stockpiling home-canned peaches and sleeping with her "head-for-the-hills bag". In the summer she stewed herbs for her mother, a midwife and healer, and in the winter she salvaged in her father’s junkyard.

Her father forbade hospitals, so Tara never saw a doctor or nurse. Gashes and concussions, even burns from explosions, were all treated at home with herbalism. The family was so isolated from mainstream society that there was no one to ensure the children received an education and no one to intervene when one of Tara’s older brothers became violent.

Then, lacking any formal education, Tara began to educate herself. She taught herself enough mathematics and grammar to be admitted to Brigham Young University, where she studied history, learning for the first time about important world events like the Holocaust and the civil rights movement. Her quest for knowledge transformed her, taking her over oceans and across continents, to Harvard and to Cambridge. Only then would she wonder if she’d traveled too far, if there was still a way home.

Educated is an account of the struggle for self-invention. It is a tale of fierce family loyalty and of the grief that comes with severing the closest of ties. With the acute insight that distinguishes all great writers, Westover has crafted a universal coming-of-age story that gets to the heart of what an education is and what it offers: the perspective to see one’s life through new eyes and the will to change it.  Via Goodreads

Next Read: Bones of Paradise by Jonis Agee

Ten years after the 7th Calvary massacred more than 200 Lakota men, women, and children at Wounded Knee, J. B. Benne

tt, a white rancher, and Star, a young Native American woman, are murdered in a remote meadow on J. B.’s land. The deaths bring together the scattered members of the Bennett family: his cunning and hard father, Drum; his estranged wife, Dulcinea; and his young sons, Cullen and Hayward. As the mystery of these twin deaths unfolds, the history of the dysfunctional Bennett’s and their damning secrets are revealed exposing the conflicted heart of a nation caught between past and future.

At the center of The Bones of Paradise are two remarkable women. Dulcinea, returned after bitter years of self-exile, yearns for redemption and the courage to mend her broken family and reclaim the land that is rightfully hers. Rose, scarred by the terrible slaughters that have decimated and dislocated her people, struggles to accept the death of her sister, Star, and refuses to rest until she is avenged.

A kaleidoscopic portrait of misfits, schemers, chancers, and dreamers, Jonis Agee’s bold new novel is a panorama of America at the dawn of a new century. A beautiful evocation of this magnificent, blood-soaked land—its sweeping prairies, seas of golden grass and sandy hills, all at the mercy of two unpredictable and terrifying forces, weather and lawlessness—and the durable men and women who dared to tame it. Intimate and epic, The Bones of Paradise is a remarkable achievement: a mystery, a tragedy, a romance, and an unflagging exploration of the beauty and brutality, tenderness and cruelty that defined the settling of the American west. Via Goodreads

Do you have titles to suggest? Email them to us!